Prediction for One Piece Chapter 1014 spoiler, chapter 1013 summary: After a while of fighting, Luffy failed to defeat Kaido and fell from the top of Onigashima. Will the mysterious person who healed the Nine Hong Bao appear to save Luffy or not? Replacing Luffy, did Yamato go ahead and knock on his father’s head for his idol Oden? 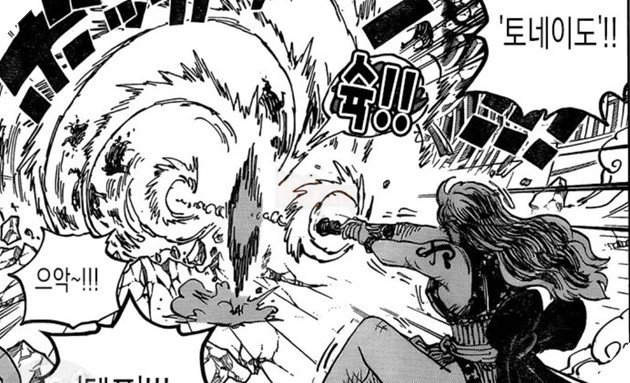 After Nami’s attack, Ulti quickly recovered. Usopp urged his teammates to run immediately, but Nami refused. Female flowers use weather sticks to launch the Tornado Tempo attack. Ulti dodged it. Arab Tobi Roppo approached Nami, about to deliver the blow to finish her off with a Head Attack.

At that moment, Big Mom launched a combination of 3 Homie Napoleon, Prometheus and Hera named Maser Cannon (the form of energy shot from a cannon) to attack Ulti. His Highness’ s powerful attack knocked Ulti out in one note! After that, we see a scene where Prometheus asks Big Mom. Homie said that Zeus was too useless and Prometheus wished Big Mom could make him … a girlfriend. Back in the present, both Prometheus and Napoleon were happy that Hera was so much more useful than Zeus.

Back to the story Zeus found with Big Mom. Nami saw Zeus hiding in a corner but she didn’t look at it because she was still angry. Zeus just saw that Hera seemed to have fallen for her (just like Greek Mythology). Zeus then asked to return to serve Big Mom. Big Mom refused and said:

I don’t need you anymore, Zeus. Hera, you can eat him!

Hera then went up to grab Zeus. Both Napoleon and Prometheus cheered. Meanwhile, Big Mom pulled Tama towards him. She tells her that the Straw Hats are bad guys and that Tama shouldn’t go with them.

While being eaten, Zeus cried in tears while apologizing to Nami for betraying her. To Zeus, Nami was to treat him the best, but Zeus was just a coward so he couldn’t refuse Big Mom’s orders.

It’s okay if you don’t forgive me, Nami. I understand that.

But now, for the first time and for the last time, I will be against her! Look at me, Nami!

Because of the debt of gratitude to Nami, Zeus tried to perform the suicide blow to rescue her, but was beaten by Big Mom and pulled his soul away from Zeus. Nami loves Zeus, tries to feed him the lightning, but Zeus is too weak. Hera took the chance to eat all the lightning and then grabbed Zeus.

Tama tells Nami and Usopp to run away immediately. Big Mom was very angry hearing that. She shouted:

Why are you running away from me Tama !? I hate people like that! I will kill everyone like that !!!

Big Mom lifted up Napoleon, preparing to attack Nami Usopp and Tama. At the climax of the climax, Kid showed up and gave the Yonko a damn Punk Gibson!

One Piece chapter 1013 returns to the battle between Kaido and Luffy. Despite acquiring new skills, the difference in strength and experience between the two pirates is still large for Luffy to create a miracle immediately. Kaido is extremely excited because it has been a long time since pirates have been able to fight him. In the final developments, we see Kaido saying:

The results were obvious. I was so excited, the Straw Hat, but it’s just coming here. It’s been a long time since I’ve been this tall, so I made a mistake. I should have taken your head and declared victory, or else the people below still believe that you can win against me.

In the final frame, Luffy is unconscious, eyes wide and white. You slowly fell from Onigashima into the sea! One Piece chapter 1013 ends here.

Prediction for spoiler One Piece chap 1014

Luffy would have to temporarily withdraw from the battlefield for a few chapters. He needed some rest and recovery time to fight Kaido one last match. There is a high possibility that Luffy will be rescued by the mysterious person who healed the Nine Hong Bao. While Luffy leaves the field, Yamato will take the throne, confronting his own father … for the sake of his idol!

Kid is now the one against Big Mom. Nami could use this opportunity to save Zeus from Hera, making the thunder-type Homie his partner. As for Usopp, he will bring Tama to safety and wait for the opportunity to shine (Saint Usopp only shows in the most important moment).

After Yamato left, Momonosuke was left with only Shinobu to protect him. This is a great opportunity for Kanjuro to disguise himself as Oden or anyone in the Nine Hong Bao and attack him. In order for the master not to sacrifice himself before his eyes again, there is a high chance that Shinobu will receive a fatal blow from Kanjuro before Kiku and Kinemon arrive.

Time to release One Piece chapter 1014

One Piece takes a week off. One Piece chapter 1014 is scheduled to release on May 30 .