Spoiler prediction One Punch Man chap 192, content summary 191: Possessing the ability to fight completely against monsters, the Silver Fang and the Human Demon Genos successfully rescued Tatsumaki and Tank Top Master. Führer (Super) Ugly Ugly crazy! What will he do to stop the heroes? 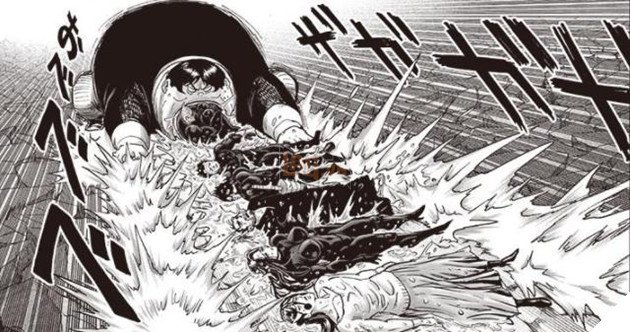 With the help of Tank Top Master, Pig God was able to bring the whole Waganma team to safety. He takes care of the wounded and then cheers on low level heroes. After all was settled, Pig God returned to the battlefield. As he walked, he thought “should I use my ult?”

Back on the battlefield, Gum and the Führer were preparing to “see the dress” Tatsumaki when Genos arrived. He punched Gum’s intestines, sending Tank Top Master out. The Human Machine Demon also conveniently burned Gum on the body, making the monster lose the ability to fight.

The Führer, who sees this, turns to attack Genos. Bang appeared, saving the Tank Top Master while counterattacking the National Leader. Realizing that Tank Top’s heart had stopped beating, Genos was about to shock his heart when Tank Top suddenly regained consciousness and recovered his body. However, the injury was so great that he was still delirious.

The monsters resurfaced once again. Gum stole Genos away. The Governor turns “Super Saiyan”, swinging his punches to attack Bang. Silver Fang used Liu Shui to transfer the attack to Gum. Gum was annoyed, then turned to eat his teammates. The heroes had more than enough chance to retreat.

Behind them, the Chief is still not dead. He tore up Gum, evolving into … “Ugly Führer – Vomit”. One Punch Man chap 191 ends here.

Having been ugly now, even worse, the Head of State certainly did not let go of the heroes. He will continue to attack, possibly even inflicting serious injuries on Genos and Bang.

4 samurai hands have not found whereabouts. Perhaps in the next chapter, they will join the battle, killing the Chief. However, as mentioned in the previous spoiler, these 4 names are very unreliable. Maybe they will be a threat to the heroes and will be the first victims of “Demon Garou”.

What is Pig God ‘s ultimate move? We don’t know yet. It can only be sure that this is a secret that consumes a lot of energy and cannot be used indiscriminately, so Pig God has only 1 chance to use in this battle.